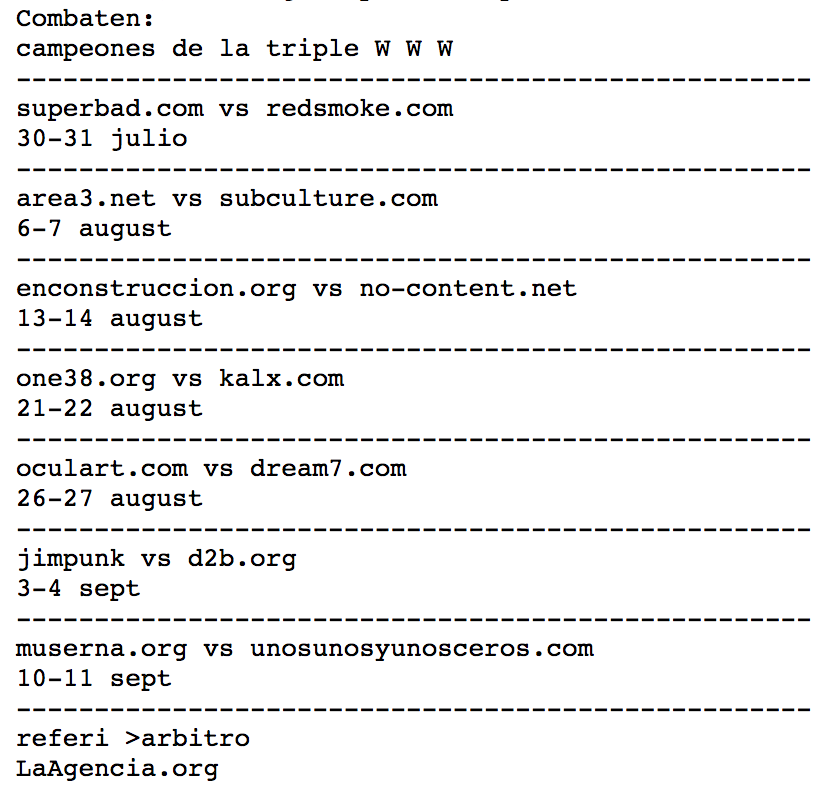 “every week they will face off in a 48-hour battle in which they will create, transform, and destroy information on the website www.infomera.net, one-on-one with no rules and in real time” 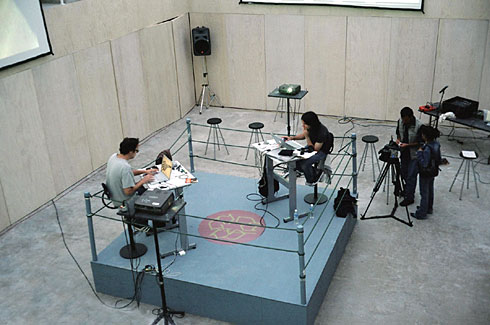 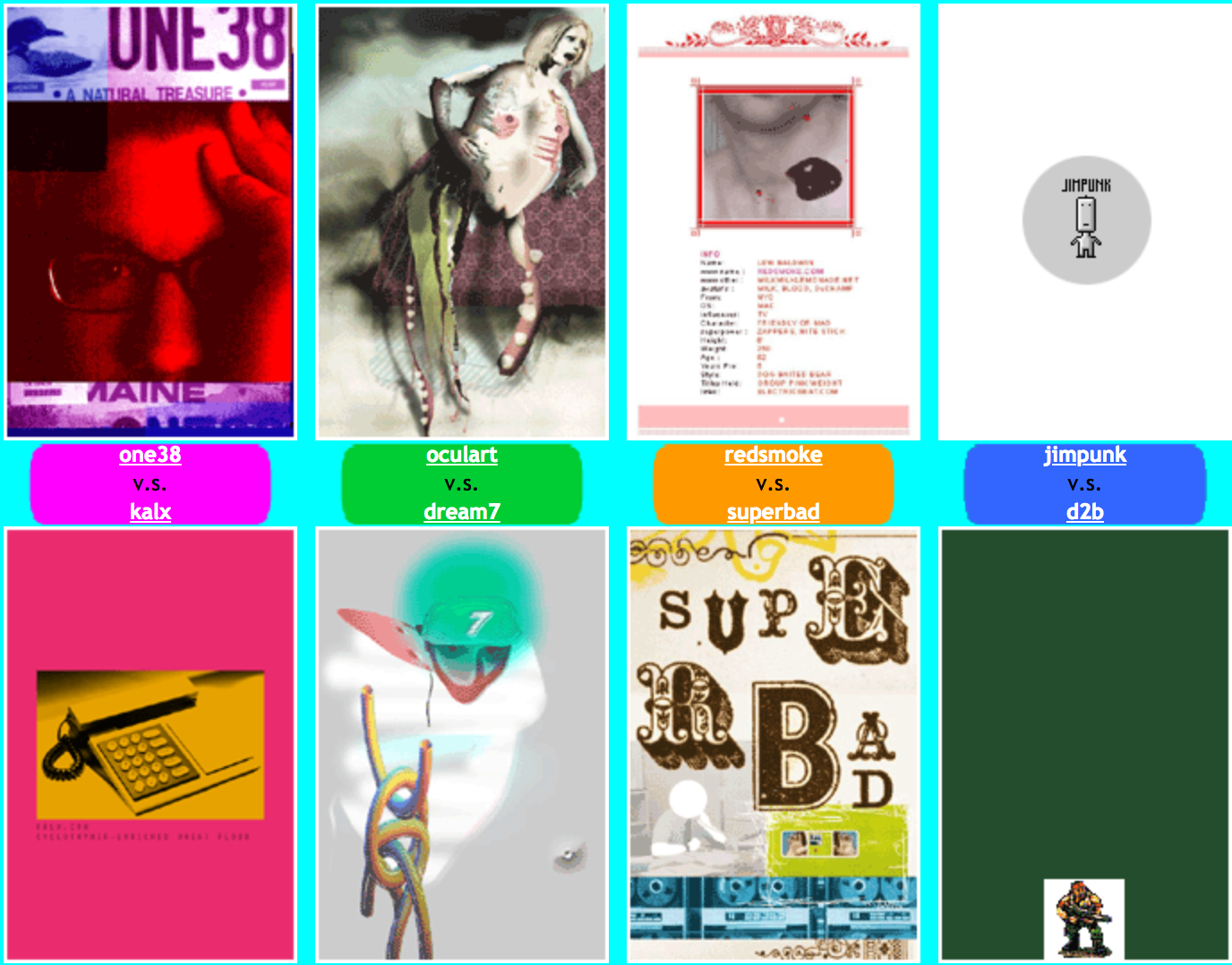 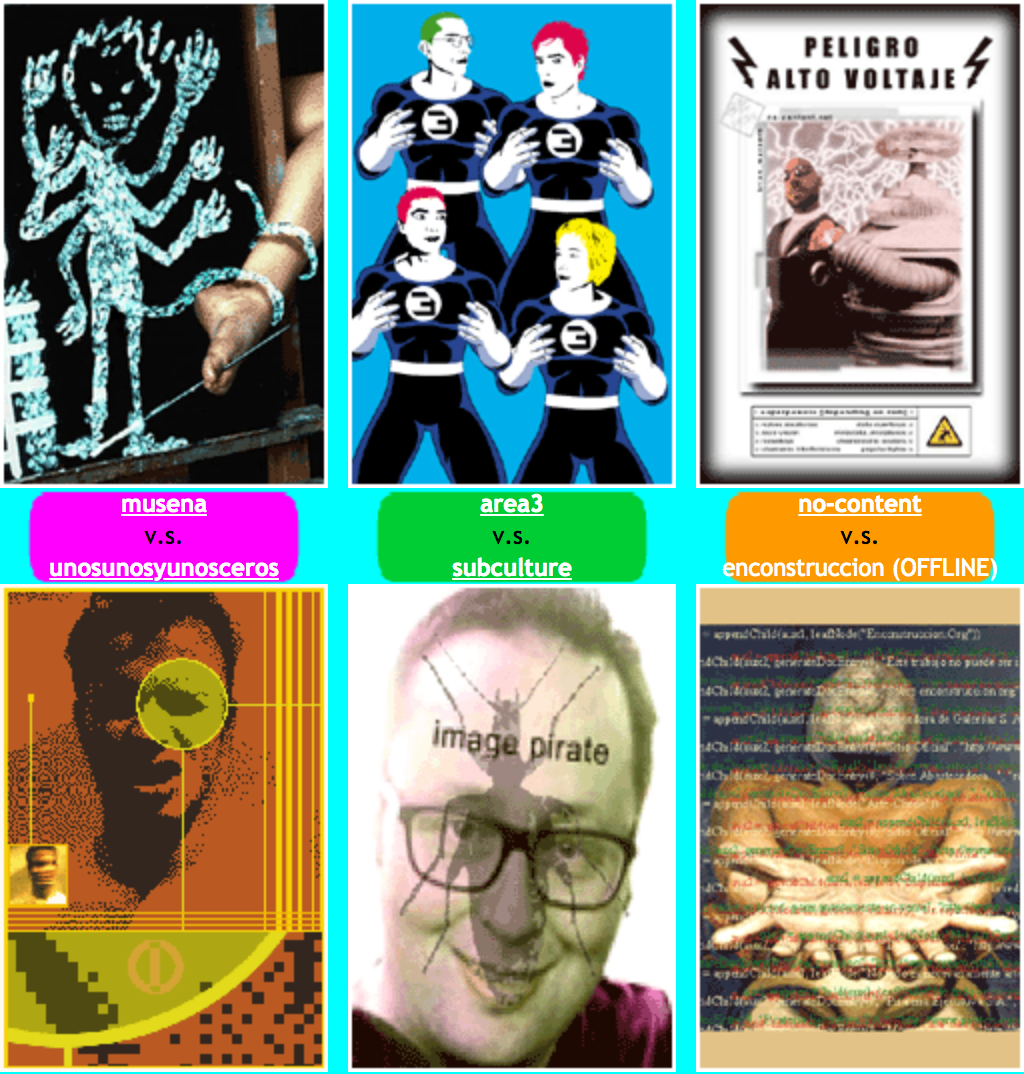 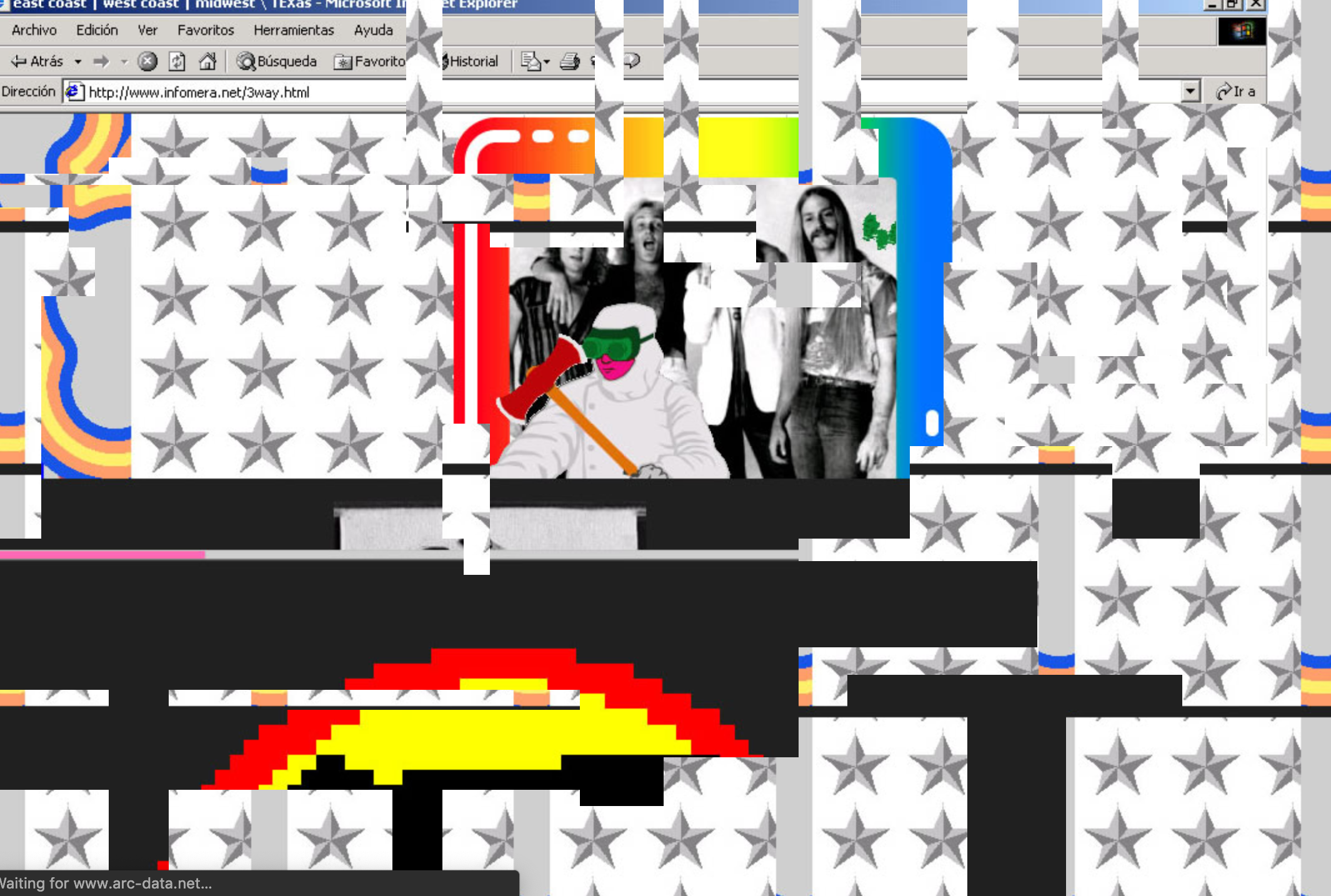 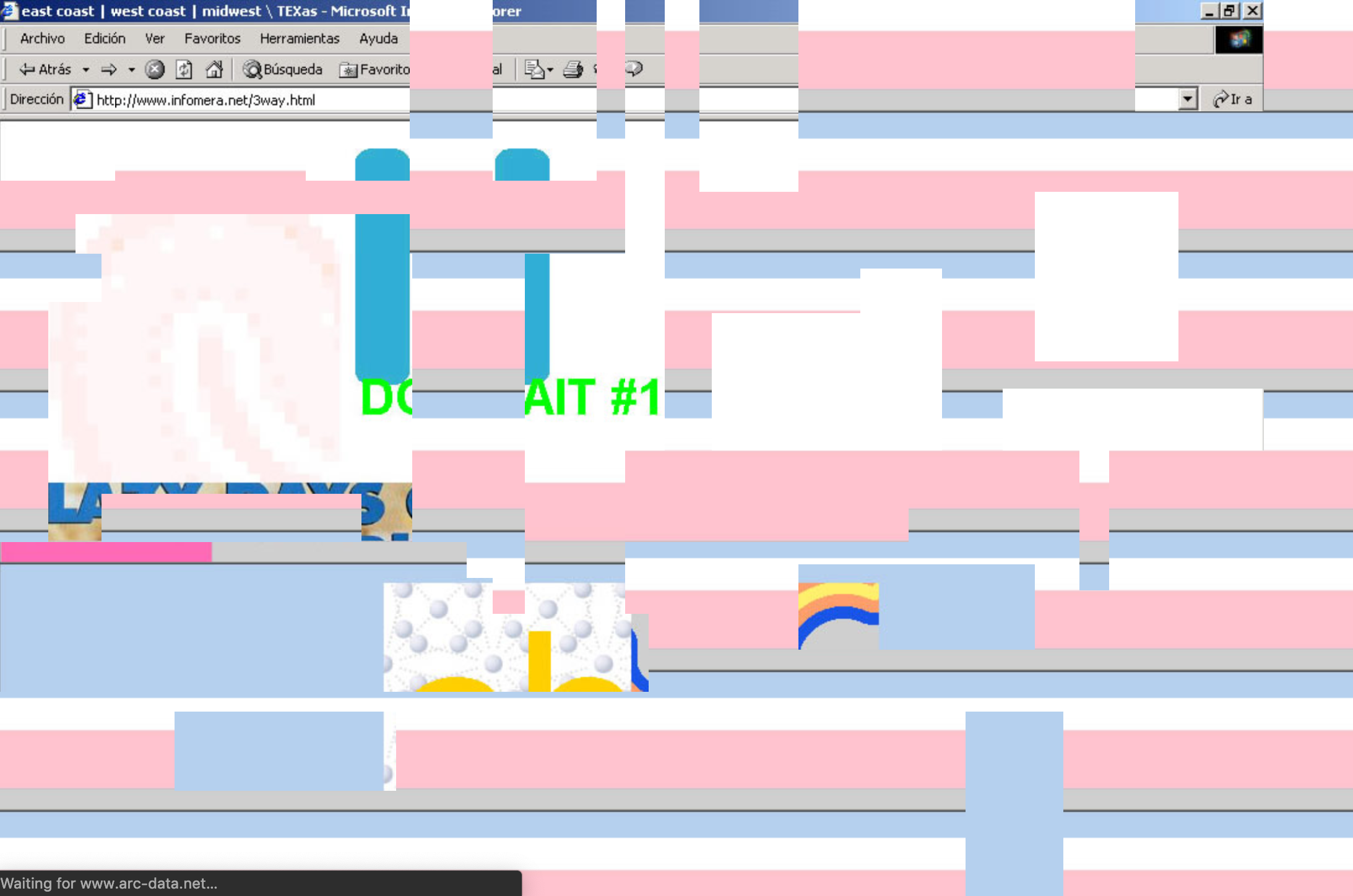 "Playfulness is a carnivalesque attack on the seriousness of computers"


Among the endless event announcements on nettime-lat, one event (or rather, one series of events) in particular stands out: Campeones de la WWW. On July 26th 2002, Arcangel Constantini announced his cyberwrestling championships, an ongoing series of one-on-one 'battles' between the "most battle-hardened net-artistas in the world". These battles represent completely undirected play, building a politics through total irrationality, abandoning any content-level political critique. This represents a development of naco-style dark play (though it took place earlier), because it takes playfulness through to its least bounded state- autotelic play (i.e. play that serves no purpose other than play itself). In doing so, cyberwrestling subverted and distorted the structures of the web at a time when it was becoming increasingly clean, streamlined, and cordoned off.

Arcangel Constantini, a net.artist from Mexico City, was one of the most prolific nettime-lat contributors. Born in Mexico City in 1970, he purchased his first internet domain (unosunosyunosceros.com) and started playing with net.art in 1998. He rose to new media art fame through his 1999 Atari Noise project, where he created a glitch art "instrument" out of an Atari game console which would produce fantastic patterns of lines and color when a game cartridge was removed with the console running. Atari Noise got him into several festivals and exhibitions, and in 2000 Constantini became a curator for the Museo Tamayo's new Cyberlounge contemporary art space.

From his position as curator at the Museo Tamayo, he was able to promote other Latin American net and new media artists, undoing some of the institutional exclusion of new media art in Latin America. In the post-naco discussions around institutionalization, Brian Mackern noted that the Museo Tamayo's support for Constantini enabled some of the most important net.art community-building and artistic production in Latin America (and the world). Mackern argued that institutionalization should be used to support artistic projects like Arcangel's (instead of the bloated rhizome.org administration). One such project, which Mackern refers to as 'performances net', were the cyberwrestling championships.

The cyberwrestling matches took place weekly from July through September 2002, pitting various net.artists from across the Americas against each other. The actual battles consisted of a forty-eight hour period in which both contestants had open access to the file system of the infomera.net website (no longer available). The login for the website was initially shared with the entire nettime-lat listserv; only when someone kept deleting all the contestants' files did Constantini restrict access. Over the course of the battle, the two 'ciberluchadores' would upload new html files (web pages) to the website and continuously corrupt and alter each other's files, creating a semi-choreographed dance of code that unfolded in the online arena. The results were only preserved in screenshots that Constantini spliced together into looping, glitchy html pages after the battle was over. However, much of the promotional materials (calendar, player cards, etc.) remain available on the internet archive.

Because this project refused to offer any sort of political critique in its content, it moved closer to play from critical playfulness. According to Sicart's framework, play is autotelic– it exists only for its own sake– whereas playfulness is the projection of play characteristics into another space that has its own, non-play intent. Error#2 and naco represent playful, critical works; they each mobilize expressly political imagery and rhetoric. On the other hand, campeones represents unrestricted ('sin reglas') play. The entirety of the project lies in the open site access and the subsequent play that occurs there. There is no clever takedown or pointed metaphor; without critical content or political subject matter at the aesthetic level, the project's rhetoric is entirely procedural.

By refusing to advocate any sort of cohesive politics, campeones takes the playful systems of interaction present in error#2 and naco and makes them the entire project. The other two works utilize irrationality in combination with explicitly political content to advance a specific political stance, constructing a critique through both their procedures and their subject matter. Without any sort of political, meaningful subject matter, the cyberwrestling project possesses a deeper, more procedural form of irrationality. By moving closer to play, campeones more forcefully demands recognition of alternatives to market rationality, but sacrifices legibility of its critique in doing so. Its politics are more difficult to parse, but reject rationality more completely than error#2 or naco.

If campeones possesses any procedural rhetoric, it is that file access should be open, we should play with everything all the time, and that we should never attempt to fit our actions into market rationale. Such a position is in clear opposition to the (then) emerging Web 2.0. Web 2.0 put the user at the center of online design, pushing the internet from organic geocities chaos (memorialized here) to clean, intuitive user experience. Campeones implies the opposite of this– turning the internet into a chaotic, open playground.

This politics of play is interwoven with a politics of Mexican identity. As Constantini describes, the references to wrestling throughout the project were a nod to Mexican lucha libre culture. Rather than a boxer seeking to knock out his opponent, the luchador wrestles in a semi-choreographed dance. Constantini treated his projects at the Museo Tamayo as an exercise in imagining digital utopias, and that is how we should read the cyberwrestling matches. He advances a vision of an internet of free, open play where Mexican identity is celebrated, not excluded. And he accomplishes this not through rational argument but a total commitment to play.

This irrationality didn't just appear in the procedural logic of campeones, it also appeared aesthetically in the memoria created by Arcangel Constantini to capture the battles in static web pages that lasted for long after the original "match" was over. The glitchy, broken presentation of the screenshots of infomera.net over the course of the battle represents a conscious aesthetic choice. Memoria emphasizes the malleability and potential for breakage on the internet that was suppressed by Web 2.0 ideals. For net.artistas, the bug was not just a software failure– it was a symbol for the colonized peoples of the world. Moreover, memoria references a technological specificity of Latin American net.art: slow internet infrastructure.

In Latin America, 'low-tech' aesthetics were integral to creating successful net.art. Because internet speeds often lagged far behind those in Europe or North America, net.artistas had to find creative ways to limit the load times of their pages. Just as ASCII art had a particular significance in Latin American net.art, block-by-block, slow-loading images that make up memoria reference this reality of the slower internet infrastructures in early-two-thousands Latin America. The subtle anti-colonial politics of this aesthetic choice underscores the procedural politics of the cyberwrestling matches themselves. Through taking part in totally undirected irrational play, the campeones refuted market rationality and, by implication the neoliberal globalization that brought new free-trade agreements, but the same old canonical exclusion of Latin American art. Through seemingly autotelic play, the campeones constructed an online politics that was irrational, utopian, and deeply Latin American.

Rather than seeking to teach its audience a lesson about cultural exclusion or commodification of the online, campeones engages the viewer through its mode of interaction. The very procedures of the project challenge market rationality. Campeones is an exercise in un-marketable, un-commodified play. The cyberwrestling battles subvert neoliberalism not just by taking place outside the market, but by making their subsumption into the market impossible. Through irrationality, auto-telicism, campeones creates an outside to the omni-present neoliberal marketplace. It intervenes in the market-oriented distribution of the sensible to make non-market forms sayable, thinkable, possible.