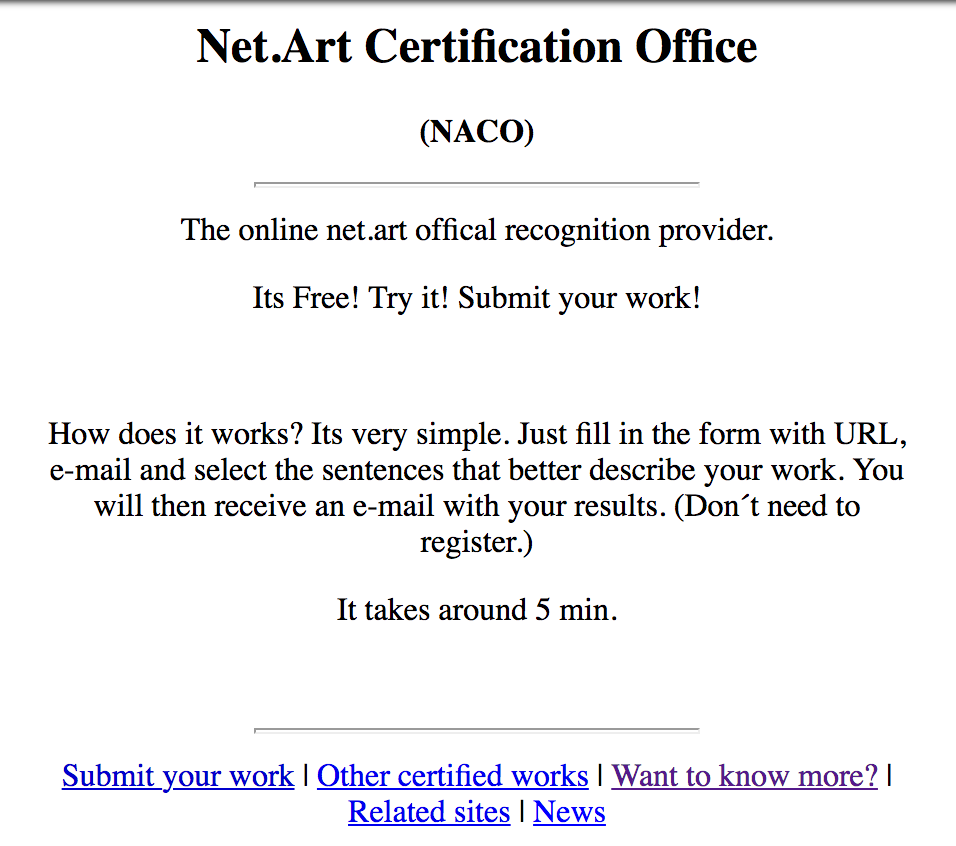 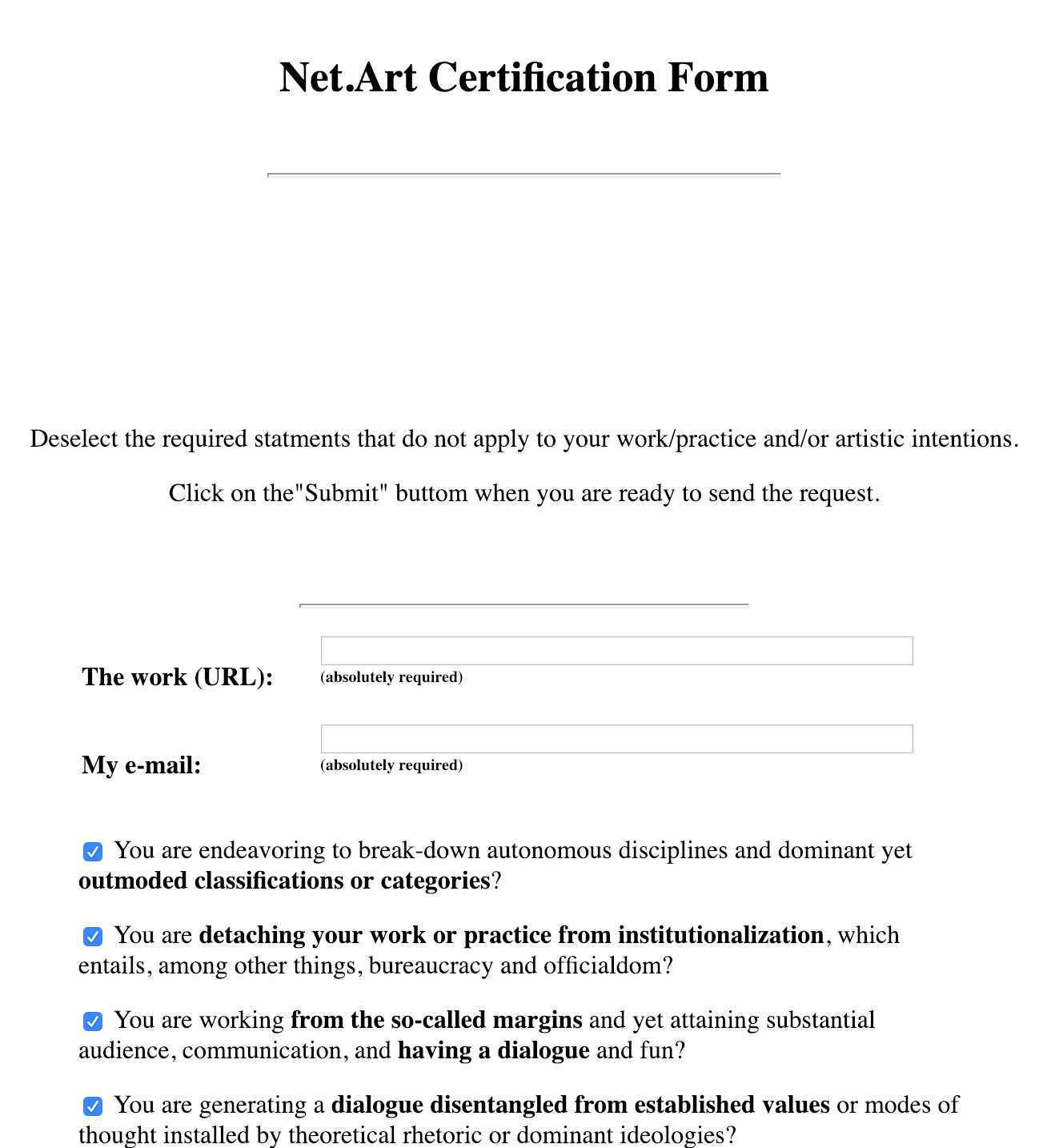 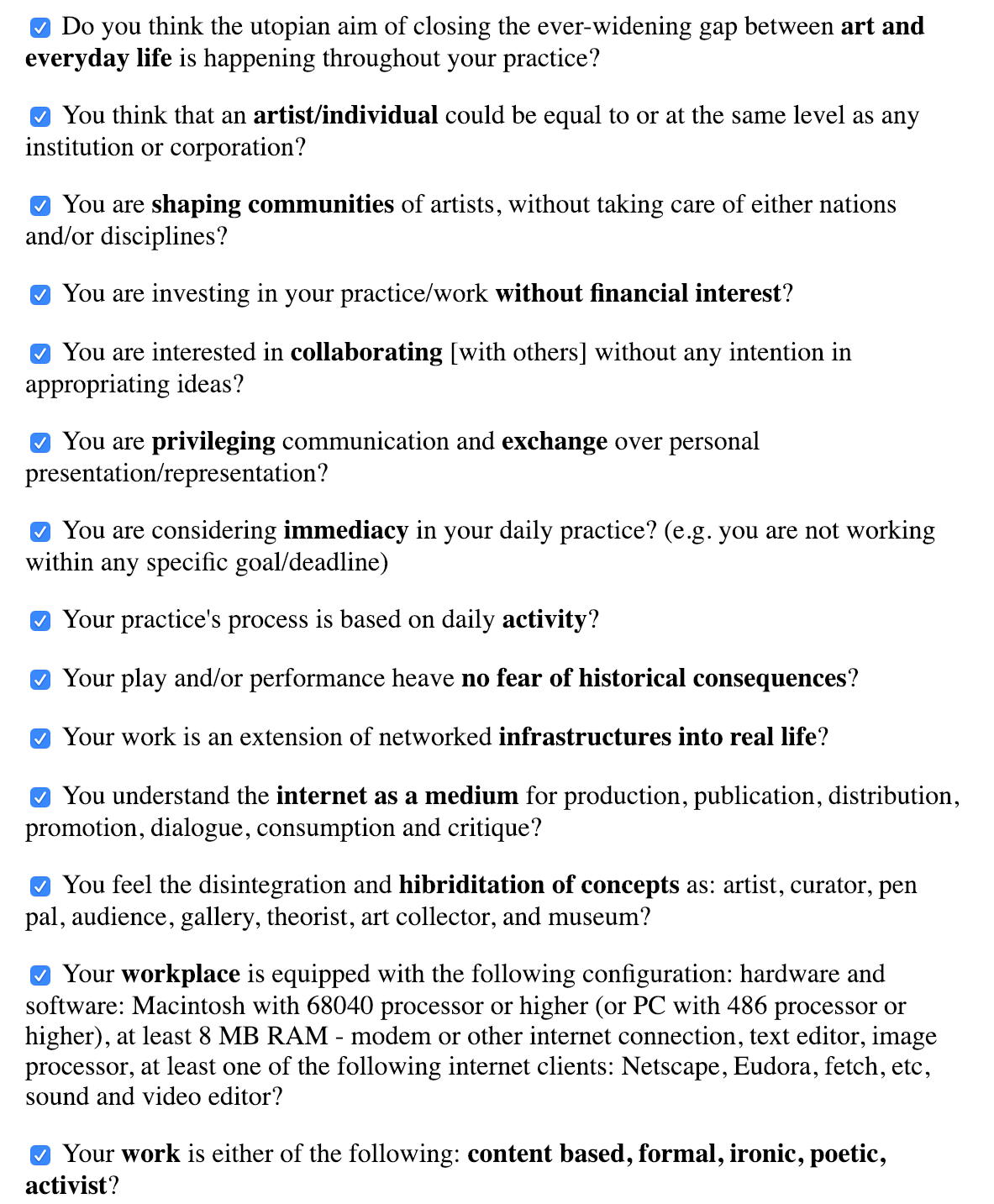 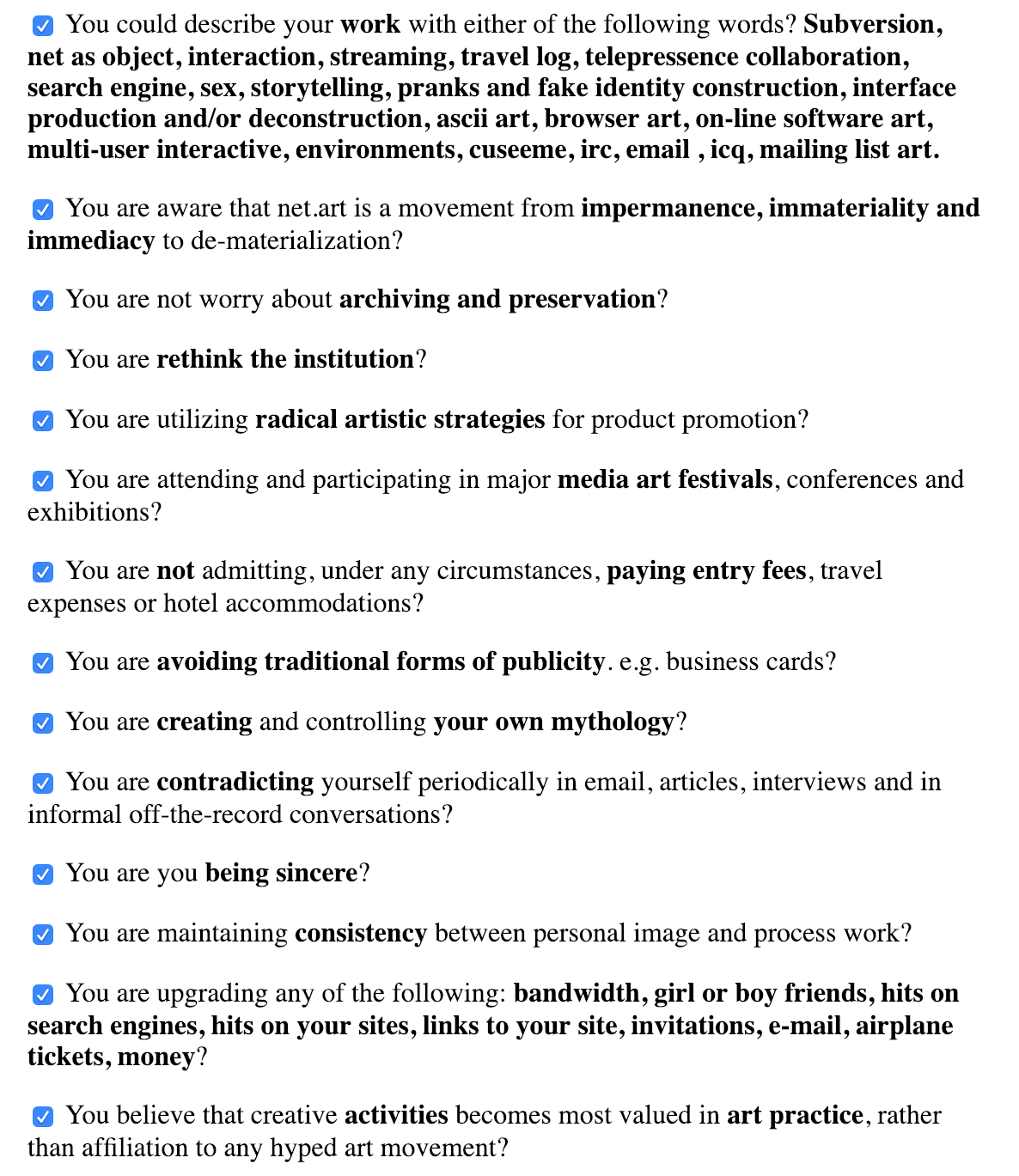 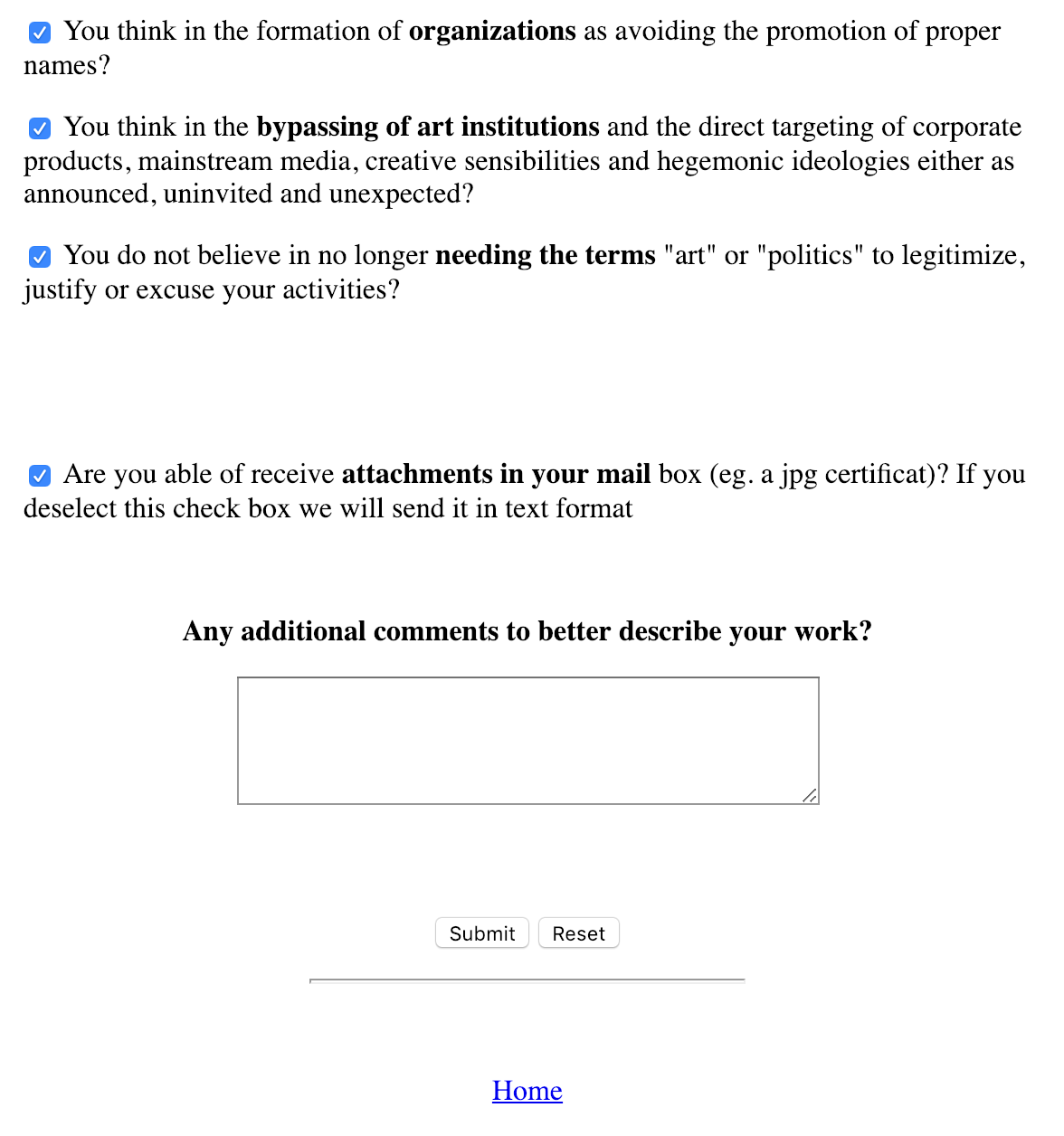 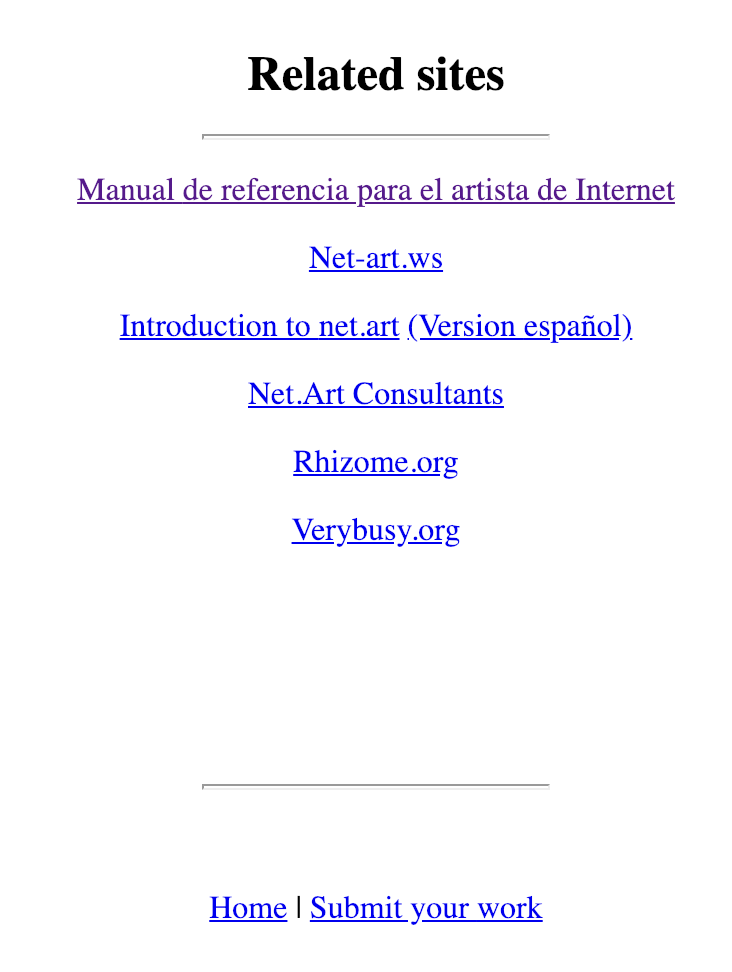 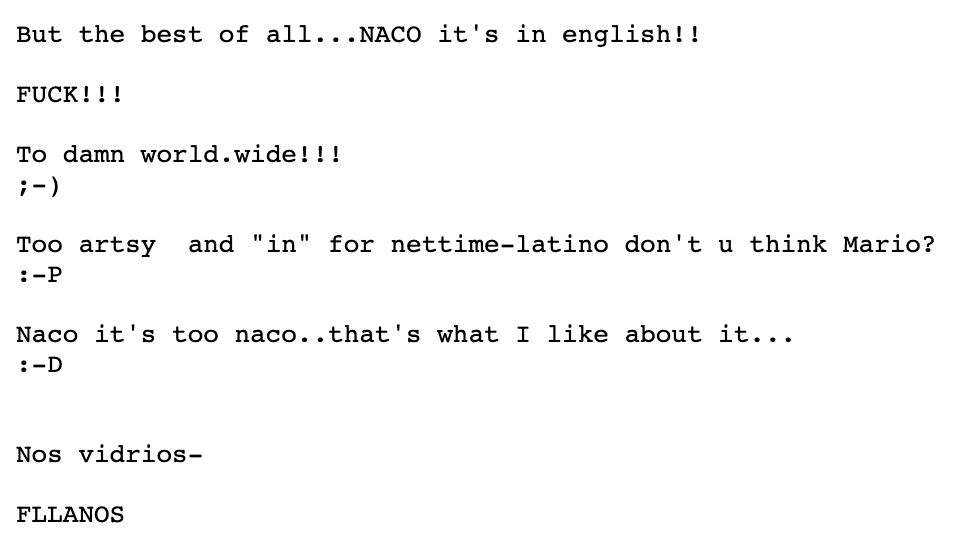 "Playfulness is the carnivalesque domain of the appropriation, the triumph of the subjective laughter, of the disruptive irony over rules and commands."

"You are not worry about archiving and preservation | You are rethink the institution | You are avoiding traditional forms of publicity. e.g. business cards

It was followed by links to Net.Art Certification Office site, a request for submissions, and a small note: "(Demo version)". This represented the beginning of a public performance of what Sicart would call 'dark play', that would open up the contradictions of late net.art and attack the logic of institutionalization that had gripped the movement.

The nettime-lat listserv was one of the principal spaces of community-building for Latin American net.art. According to Brian Mackern, the email list began in 2000 and quickly became an online 'center of gravity' for net.artistas. For this reason (and the fact that all of its emails are archived online), this listserv represents a key source of primary materials for this thesis. Combing through the archives allowed me to put together a rough timeline of the evolution of this community and exposed me to countless artworks I never would have found otherwise, including the Net.Art Certification Office and the infomera.net cyberwrestling battles. Furthermore, the listserv gives a (relatively) un-mediated view into how this community thought of itself and its project. I lean on this archive heavily and would encourage interested readers to explore the links I include here. Interspersed between endless event advertisements, there are many more bizarre, provocative email threads beyond the ones I reference directly.

The responses to this initial message were fairly tame compared to what would follow the official release in March 2003. Some complained about the fact that the site was entirely in English. A few criticized "N.A.C.O", asserting that net.art existed to resist institutionalization and create work that did not need expert approval in order to be disseminated. Our friend Laura Baigorri chimes in to critique the critique, "la lógica de la red reproduce miméticamente todas y cada una de las situaciones que tienen lugar en 'este lado'". That is: the logic of the internet reproduces that of the real world; just because they were accessible to all did not mean that net.art and the internet were actually democratic. She implies that the Net.Art Certification Office is meant to critique that inequality, not simply uncritically reproduce it.

The full launch of the Net.Art Certification Office (or naco as it came to be known on nettime-lat) did not take place until the following March. Arcangel Constantini set off a flurry of activity when he sent this message to the listserv. In it, he and several other net.artistas lay out a prescriptive manifesto for net.art and offer to certify any work that meets their criteria. The actual content of the guidelines is a mix of superficially earnest critiques (community self-legitimization should replace institutionalization) and seemingly pointless provocations ("digital creation" should replace "net.art").

Though the links are now dead, the Wayback Machine has archived versions of the site, netartcetificationoffice.net, going back to the time of these messages. The 'about' section explains,

It reassures the viewer,

"We do not intend to institutionalize net.art but to create new kinds of platforms in order to keep going the discussion on intentionally correct / context conscious work."

Also on the site is a list of "certified" works, a form for submissions, and links to "related" sites including other tongue-in-cheek net.art institutions and some real ones (e.g. the much-maligned rhizome.org). Every time you click a link, a pop up appears that explains how the guidelines were determined, perhaps caricaturing institutional self-promotion. Naco's mode of interacting with its audienced produced an anti-institutional rhetoric– the procedural critique emerges from the playful appropriation the processes of the bureaucratic institutions that are its target.

The responses to naco were swift and numerous. In total, the initial email generated roughly thirty replies– more than any other topic that month and more than all but a few topics from the entire lifespan of the listserv. One of the first responses was this (scrambled/unscrambled) message from Brian Mackern where he acknowledges the playful move that naco is making, comparing it to the sardonic plays of Jorge Ibargüengoitia: "pense que NACO... era una acida ironia ibargüengoitiana." Yet he goes on to substantively address each of the points of the manifesto (click above to see). Besides arguing that communities already 'self-legitimize' net.art (and that it shouldn't require institutional validation), Mackern broadly agrees with the rest of the manifesto. Other replies include one naco member sarcastically proposing a control body to oversee the control body of naco and then asking to never be contacted again, naco organizer Mario Garcia Torres defining naco more specifically, and others jumping in on the fun: 'NACO is god...(almost as Bush...!!)'.

As illustrated by these replies, naco's key contribution was not the content of its manifesto. Though it sparked some debate, its guidelines mostly represented either commonly-held positions or tongue-in-cheek provocations. Rather, naco's overt, hyperbolized institutionalization was what generated so many responses. Naco subverted net.art itself by breaking the 'rules' of the no-rules listserv (and no-rules art movement). To break rules that don't exist represents a specific kind of playfulness: dark play. Sicart defines dark play as 'a playful approach to play situations'; where the disruptiveness of play is wielded in 'gentrified play contexts'. For naco, the nettime-lat listserv (and broader net.art movement) represented the 'gentrified' playground. Play here was accepted, encouraged, even institutionalized. In order to break these no-rules, naco had to do something radical: encode its own rules and institutionalize net.art.

This dark play created a critique that targeted institutional net.art itself. One of the sites linked on naco's page, rhizome.org, represented one of the largest net.art communities (along with nettime's various listservs) and would go on to become the net.art organization. From other emails, we know that net.artistas thought of rhizome.org as a pseudo-corporate institution. Linking to rhizome (on naco's 'related sites' page), is more than a superficial reference to a net.art-adjacent organization. It is a direct comparison, a tongue-in-cheek note that rhizome represents the institutionalization being mocked.

Openness and accessibility, both in production and dissemination, represented key net.art tenets, but in its later years it often fell short of these ideals. While it still banged the drum of institutional critique, rhizome increasingly resembled the art world institutions it positioned itself against. Naco, the institutionalized, anti-institutional institution took this contradiction and expanded it into an extended online performance, creating a Rancierian disruption of what was speakable, thinkable in the net.art community. It opened up net.art itself as an object of criticism.

Another key dimension of naco, as noted by Fernando Llanos in his 'naco is god' message, was the fact that the entire site and almost all of its communications (i.e. nettime emails from members) were written in English. Not only was naco's net.art institutionalization already contradiction in terms, it reproduced the cultural exclusion that net.art purportedly opposed. Institutions were picking net.art's winners and losers with one, while simultaneously criticizing the very institutionalization they represented. Error#2 critiqued this exclusion directly by subverting neoliberal rationality with playful irrationality. Naco critiques Latin American exclusion by way of satirizing the anti-institutional institution and opening up its contradictions. It breaks the no-rules to show that they have already been broken right under net.art's nose, and pointedly ignores Latin American difference in order to highlight Latin American exclusion. This represents a deeper level of play than the more direct critique of error#2: naco makes one more move beyond irrationality– re-rationalizing (institutionalizing) play.

As with error#2, arguing against institutionalization the with a more rational, serious rhetoric would have failed. This failure would not arise from rhizome and similar institutions adopting neoliberal rhetoric to counter dissent, but simply because these institutions were forced to operate as rational actors in a market system. Because they had to survive in a rationalized neoliberal framework, institutions implicitly operated according to that framework, regardless of their members' political stances. Thus to meaningfully criticize them, art had to criticize the neoliberal framework, and with it, market rationality. Simply criticizing the consequences would be not intervene in the 'distribution of the sensible'. Institutional critique was institutionalized, and already 'thinkable and sayable'. Critique of the net.art institutions by way of their underlying systems, of market rationality was not– naco made this critique visible through a playful, satirical performance.