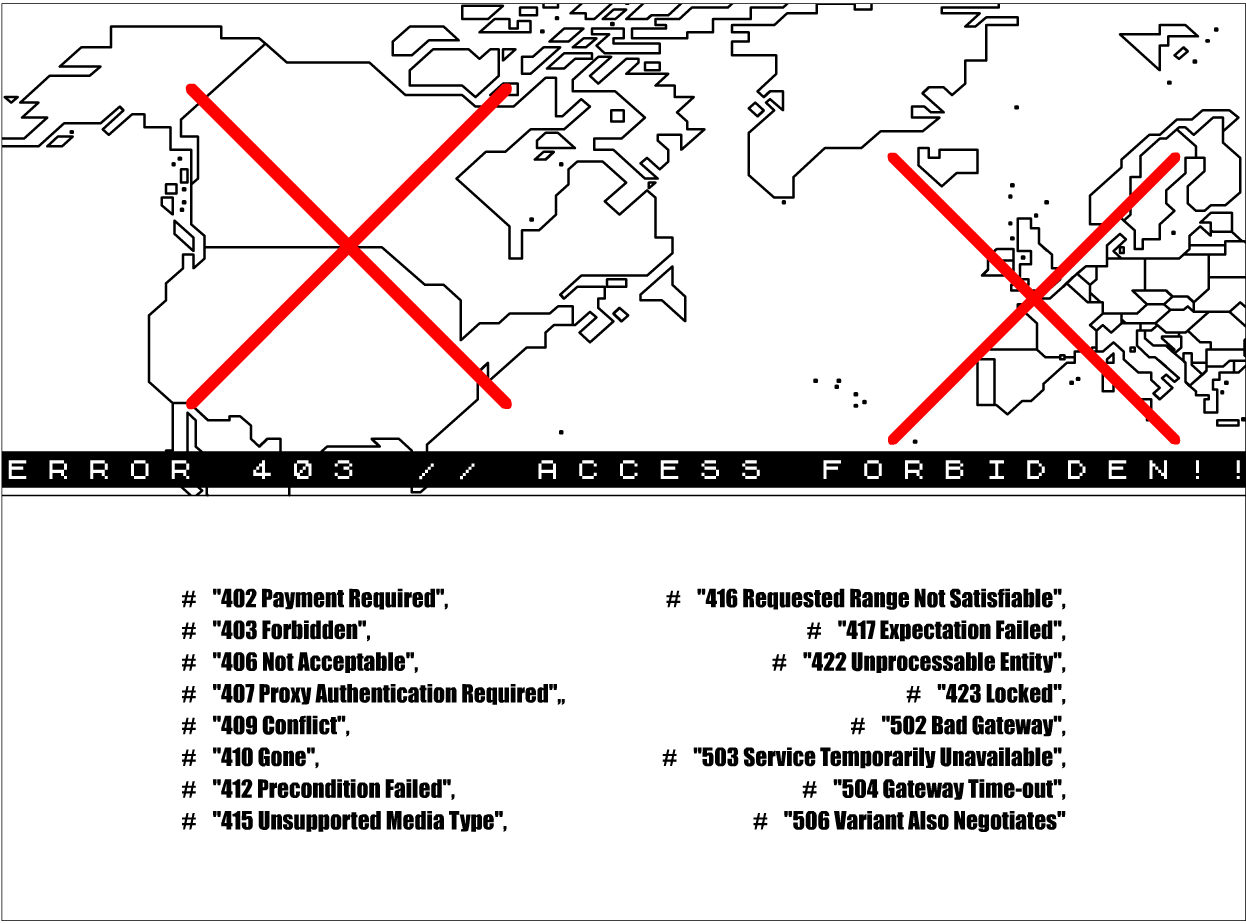 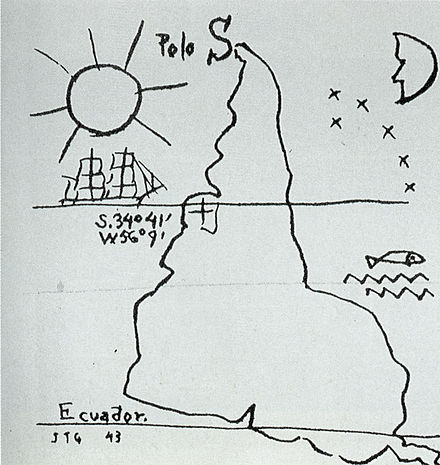 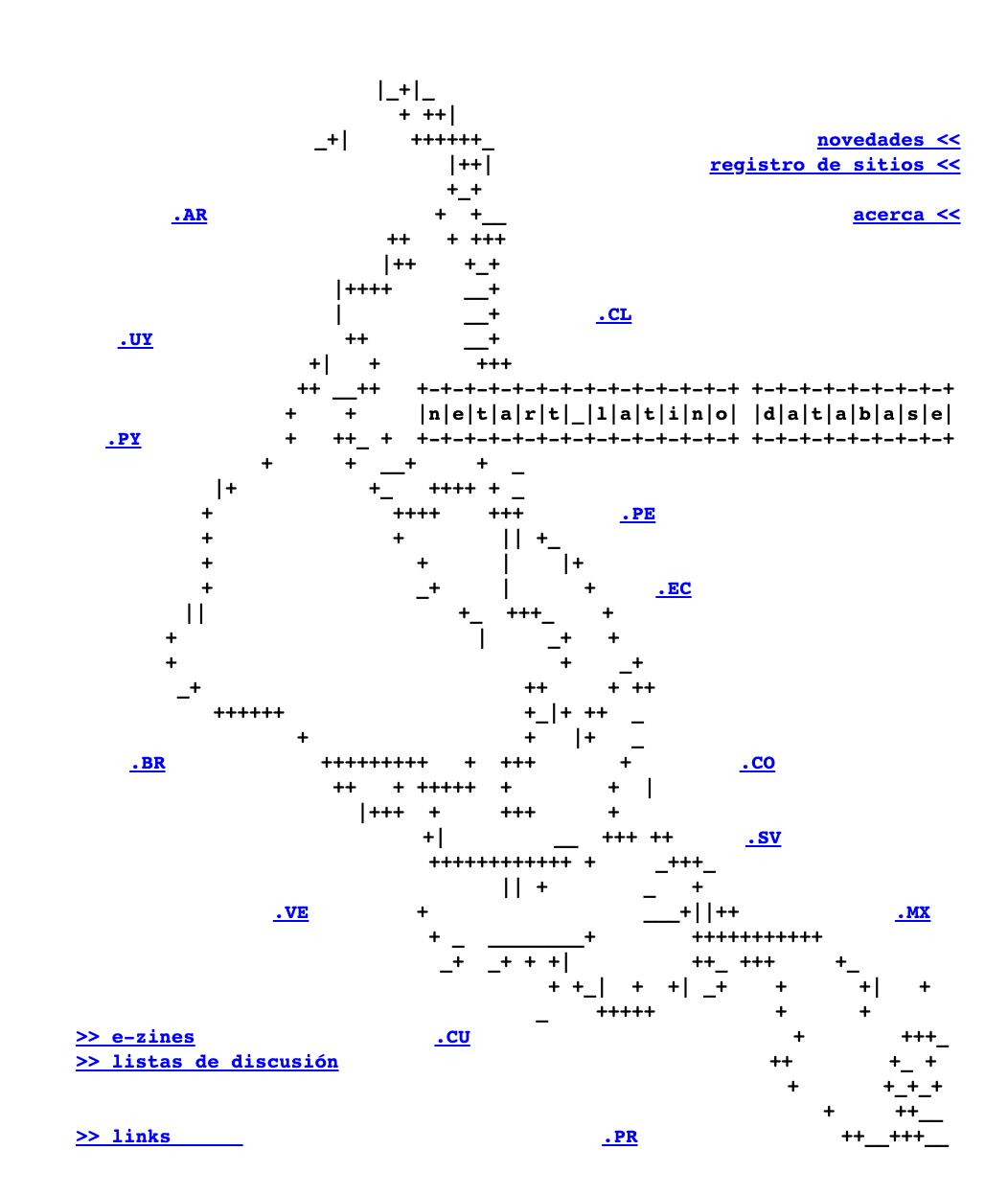 - Ranciere Distribution of the Sensible, p. 107


Near the bottom of Brian Mackern's (extensive) homepage-portfolio-timeline, one of the earliest branches reads "[ error #2 ]". Following the associated link reveals one of the more biting, bizarre pieces in Mackern's collection. Error#2, created sometime in the late nineteen-nineties (based on it's position on the page), cultivates a "glocal" politics through playful, chaotic interactions and explicit border imagery.

Based in Montevideo, Brian Mackern was a prominent member of the net.artista community. Responsible for the now-canonical netart_latino database, Mackern fought tirelessly for global recognition of Latin American net.art and was one of the chief organizers of its online community. He consistently oriented his work towards rectifying the continued exclusion of the net.artista community. Much of his work pointed out that the promised globally equalization accompanying the rise of the internet never came to be. His focus on the politics of his work in his work makes him a useful case for examining how neoliberal ideology (both economic and cultural) was refuted in Latin American net.art.

Error#2 [click the link and play with it] consists of a flash animation with sound that occupies the middle of the viewer's browser window. It shows a simplified, angular map of Europe and North America with flashing red X's over each continent, indicating their inaccessibility. Below that is a list of HTTP error codes– a metaphor for the impermeability of national and institutional borders. A computerized voice yells "ERROR" over and over until the box is clicked. Altogether, these elements create a visceral sense of irrationality; a screaming flashing message of exclusion interrupts the clean, rational internet. Mackern appropriates the aesthetics of the web to create a piece that misuses (i.e. plays with) the browser window and refuses any sort of reasoned engagement in favor of overwhelming absurdity.

When clicked, the window switches to a digital rendition of Torres-García's upside-down map of South America. Montevideo, Mackern's home, broadcasts a message that remains "NOT FOUND"– unheard by the cultural centers of the West. This reference is laden with meaning; in Torres-García's original, the map's inversion implies a nullification of (neo-)colonial hierarchies, specifically those within the art world. The piece unifies the optimistic América Invertida and the irrational reality of exclusion to create a playful critique of neoliberal internet-utopianism. In embracing the irrational, Mackern strips the border of any rationalist rhetoric and paints it as a site of absurd violence for non-Western immigrants and insurmountable exclusion of non-Western culture.

This piece is playful because it projects the appropriative, disruptive elements of play into a non-play space, the browser window. Its chaotic, invasive mode of interaction runs directly counter to the browser's goal of clean, easy access to information. It appropriates the rationalist aesthetics of the computed internet- error codes, simplified vector graphics– and turns those rational aesthetics back against the internet. error#2 breaks the internet with its own tools; it makes the rational irrational, thus undermining the very idea of (neoliberal) rationality. This logical breakage is simultaneously applied to borders and the art world; not only is computational logic rendered irrational and intractable, so are national boundaries and so is cultural exclusion. This turn to playfulness (appropriation and disruption) allowed the piece to break the politics of neoliberal rationality and advocate its undoing.

Despite the supposed flat globality of the internet, many net.artistas recognized their work as intimately connected to their local experiences– an attitude visually represented with the Montevidean broadcast imagery in error #2. This attitude appeared in the works' politics as well, creating the post-regional 'net.artista' approach present throughout these cases.

In the book accompanying Mackern's netart_latino database, Lily Pagola argues that one of Mackern's principle projects was to "remedy the absence of representation" of Latin American net.art. The database attempts to map the terrain of Latin American net.art (also referencing Torres-Garcías América Invertida), with the implicit goal of increasing its visibility through the curatorial work. The explicit reference to mapping, with all of its colonial connotations, represents both a nod to the ways colonial cultural hierarchies were still enforced and an attempt at subverting those hierarchies by literally inverting them. As opposed to the measured, thoughtful approach Mackern takes with the database, error #2 makes its claim through chaos.

Error #2 does not attempt to persuade, but to assault– the computer voice screaming "ERROR" at you leaves no room for argument. The work completely appropriates the viewer's computer, exposing the border as totalizing and irrational. Where the netart_latino database invites exploration and persuades the viewer with tangible evidence of a prolific net.artista community, error #2 demands attention and pretends to care little about its viewer's opinion. Its playfulness, specifically the carnivalesque appropriation of the browser window, creates an irrational rhetoric that cannot be reasoned with by neoliberalism's rational actor. It demands to be noticed and taken seriously, forcing even the most uncharitable viewer to grapple with its claims. By foregoing a rational dialogue, error #2 avoids the Western, rational debate over inclusion (a debate which Latin America has been losing since colonization) and contends directly with the actual irrational reality of cultural exclusion.

The internet was supposed to bridge the "developmental" gap between the Global South and the West. It proponents promised a dissolution of cultural boundaries and creation of one, global identity. Needless to say, it fell short of these techno-utopian aspirations. Rather than operating as a global homogenizer, Mackern and his peers argued that the internet produced a "glocal" culture. In Artistas Latinos Making Global Art, theorist and nettime-lat contributor Laura Baigorri uses the metaphor of a water molecule to refer to "glocal"-ness. Just as hydrogen and oxygen combine to make a completely different substance (water), the internet mixes global and local cultures to produce a glocal culture. This glocal culture operates as a nuanced, complex hybrid– something more than just the sum of the local and the global.

The idea of "glocal"-ness reflected the reality that Latin American net.art occupied a marginalized, constantly negotiated position in the broader net.art world. English was the undisputed lingua franca of global net.art. Therefore, as Baigorri argues, the use of English in Latin American net.art (e.g. error #2) indicates a global (rather than regional) audience. "Anglophone colonization" of cyberspace is complete– there is no Latin America on the internet. Yet these artists are still Latinx, borders and cultural exclusion are still real. Mackern struggles against this contradiction, this exclusion, though playfulness: producing a thing that itself feels completely irrational (i.e. error #2). He appropriates and disrupts the computed internet to challenge the inflexible rationality of both physical and cultural borders. This constitutes a procedural rhetoric that seeks to refigure Latin American-ness in the domain of the online and undermine neoliberal rationality.

Why is the commitment to irrationality so crucial? One could imagine a work with similar political goals that explored the violence caused by borders through a photo-essay, a documentary, or maybe a political cartoon. But such gestures would (and do) fail to actually address the ideological forces that produce such violence, namely the ideology of rationalization.

Failure under neoliberalism is no fault but your own. Neoliberalism doesn't care about art-world exclusion or colonial legacies. It knows no "systemic issues" or global community. There is only the market and actors within it. Success and failure is determined by the quality of your product or your "human capital" and nothing else. If you fail to adapt or invest smartly, that's your own fault. If you're too poor to cross a border, that's your fault. If your art is ignored by cultural institutions, it must not be valuable enough. There is no reasoning with the system. If you show neoliberalism photos of starving children, it might see market inefficiencies or maybe unavoidable externalities, but it certainly does not recognize a human rights crisis. Neoliberalism seeks to bring every facet of human life into the market– its goal is total rationalization. So to oppose neoliberalism's consequences requires opposition to its underlying logic of market rationality.

By abandoning rationality, refusing to logically persuade its viewer or debate the border, error#2 knocks neoliberalism off balance; it can't be answered with market rationality. Clearly net.art did not bring down global neoliberalism, but at the very least it proposed an alternative to the impotent (dare I say liberal) rhetoric that opposed neoliberalism's consequences without opposing its ideals. This follows from Ranciere's ideas of art intervening in the distribution of the sensible. With its playfulness, error #2 makes alternatives to market rationality visible and thinkable, while the hypothetical photo-essay does not. The subsumption of rationality into a political, economic program renders rational art impotent. Art that successfully challenges neoliberalism must challenge its underlying logic of rationalization. Through playfulness, Mackern proposes an alternative to hegemonic market rationality in a way that rational art could not.